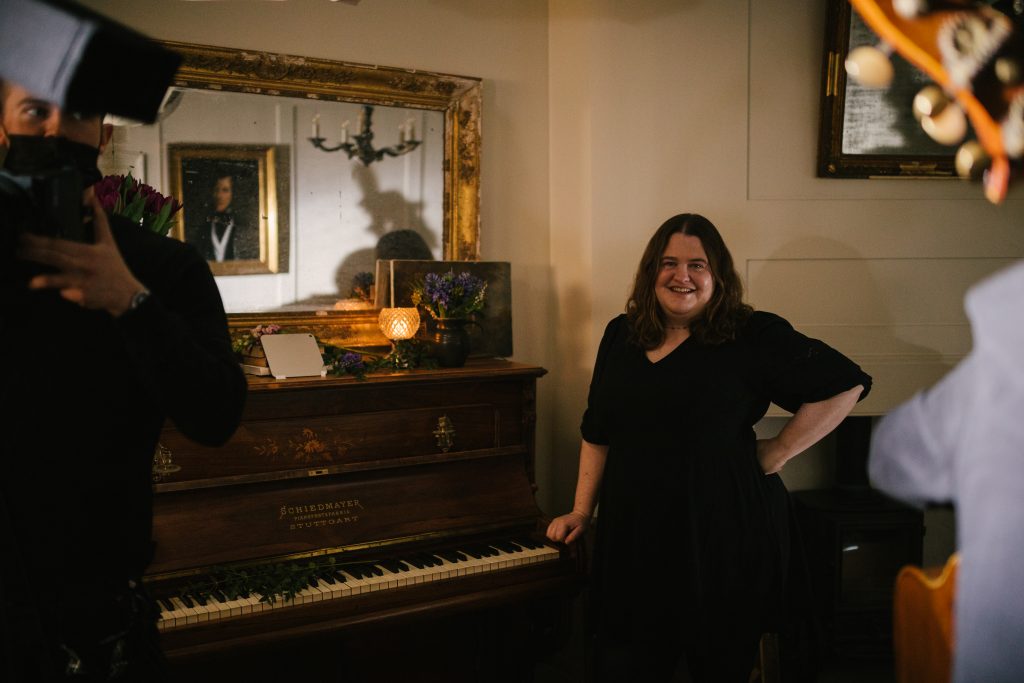 Jackie always performs her solo material with an accompanist, quite often guitarist and accordion-player Mike Cosgrave.

‘Gracious Wings folds ballads & originals together tenderly while avoiding high sugar, though her lovely take on The Longpigs’ On and On should get the John Lewis Xmas ad team on the phone pronto.’ (The Guardian).

Jackie Oates is a central figure in English traditional music and is regarded as one of the country’s best loved folk performers. In addition to performing a variety of concerts throughout the year, Jackie’s current focus is on collaborating with a diverse array of artists and commissions. Jackie is an English Folk Musician, Singer, Performer and Educator. Jackie lives in Oxfordshire with her young family.

After 17 years and seven solo albums Jackie Oates is a central figure in the accomplished, informed and stylistically individual English traditional music scene that began in the early 2000s and continues to thrive. Regarded as one of the country’s best loved folk performers, Jackie’s current focus is on collaborating with a diverse array of artists and commissions. Jackie continues to perform concerts and make the solo records that regularly rack up glowing broadsheet reviews, and in addition of late, is focused on her work as a collaborator and contributor; finding new and surprising artistic corners to illuminate with her voice, research and musicianship.

Following the death of her much-loved dad five days after the birth of her first child, Jackie’s 2018 album ‘The Joy Of Living’ reached beyond the past lives in folk song to the lived experience of all of us. The Guardian called it “utterly gorgeous… moving, depth-filled.” Since then, Jackie has released classic covers with Scritti Politti’s Rhodri Marsden, researched pagan Bath for the mavericks at Lush cosmetics, been Artist In Residence at the Twitter-famous Museum of English Rural Life, lent her voice and musicianship to CBeebies’ Nick Cope’s Popcast, and begun an ongoing mixed media work about the history of lace telling.

2020 saw the release of an entirely handmade (right down to the sleeves) duo album with John Spiers, called ‘Needle Pin, Needle Pin’ that features some of the songs from Lace Tellings, Jackie’s radio ballad that tells the story behind the lives of the girls who lived and worked in the lace making areas of Southern England, through spoken word, songs and music.  Jackie Oates continues to bring elements of the English folk tradition to new people and places; in turn bringing a much-needed calm and joy to those who hear it.

Jackie hopes her albums reflect the here and now. She says: “I like my solo albums to reflect the time in which I’m recording them and any themes that feel relevant at that point in life’s journey.” In the six months in which Gracious Wings was recorded Jackie was juggling her time studying for a Masters degree in Music Psychotherapy, looking after her two young children as well as watching her mother struck by degenerative illness.

For her degree Jackie has been shadowing Tom Crook, the resident music psychotherapist at an Oxford hospice. Says Jackie: “I was fascinated to undertake this work as a means of understanding and becoming friends with the process of life and death, having lost my Dad suddenly in 2016 and subsequently watching my Mum move into a rapid form of early onset Alzheimer’s. On my first day at the hospice Tom likened his job to that of ‘Gracious Wings’, a ‘harpy’ from Oxford author Philip Pullman’s fantasy His Dark Materials.” The harpy has the body of a bird and the face of a woman and resides as a guardian in the land of the dead where it listens to stories told by the deceased. It is depicted on the album’s striking cover by illustrator Jo Elizabeth May. Pullman has explained: “I like the idea that when you die you have to give an account of yourself – a true story about what you loved and saw, what you knew and did. If it is true and resonates with the Harpy, you are free and will dissolve and become part of the universe again, unburdened by your past.” 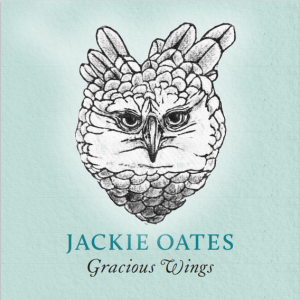 ‘There’s never a single moment of disappointment involved with anything Jackie Oates releases, each project not only well received initially, but they invariably go on to pop up time and again on the player well after review attention.  A must for Jackie fans and music lovers alike.’ (Northern Skies)

‘Whatever Jackie Oates turns her hand to the result is always enchanting, captivating and spiced with surprises’ (Folking.com)

‘Gracious Wings, an album underpinned by top-quality musicianship, is another assured & enthralling collection from one of the undoubted talents of the contemporary folk music world.’ (Folk Radio UK)

‘A sublime bittersweet collection, but ultimately suffused with hope and compassion and further evidence as to why Oates is regarded as among the greatest of our contemporary folk treasures.’ (FATEA Records)

‘Her cover of ‘On and On’ by indie band the Longpigs is a bit of genius, proving that a good song can be done in any musical genre or manner. Jackie Oates is regarded as one of folk’s leading lights and you can see why as her latest album has enough to please the traditional folkie and more importantly, appeal to those who wouldn’t normally listen to folk music and are drawn in by the fine singing and musicianship that can be heard. **** (Get Ready to Rock)

‘Gracious Wings is courageous, beautiful and uplifting, and will undoubtedly be one of the best folk albums of the year, from one of folk music’s greatest contemporary artists. Watch her soar.’ (Shire Folk)

“Sensitively arranged and beautifully sung;’ there is a surprising cover of The Longpigs’ 1996 chart hit On and On , beautifully crafted  with exquisite vocals.” (Folk London)

Songlines selected ‘Robin Tells of Winter‘ as a Top of the World track featuring in their covermount CD (Nov 2022 issue) ‘One of folk’s finest singers on confession and grief’.

‘Jackie Oates has proved to be among English Folk’s finest singers – a field full of great and original talents. Sometimes, I think she’s the finest of all. Listen to a song she wrote during lockdown, ‘Robin Tells of Winter’, the second track on this fabulous album, and see what you think. The fiddle tune to follow that, ‘Gracious Wings’, highlights her dexterity too, as an instrumentalist with a big emotional range. She plays on the heart strings which are pulled and tightened across many a song here. There’s a sweetness and melancholy to her voice that is like no other, and for which there is no known formula with which to replicate it.’ (Tim Cumming, Songlines)