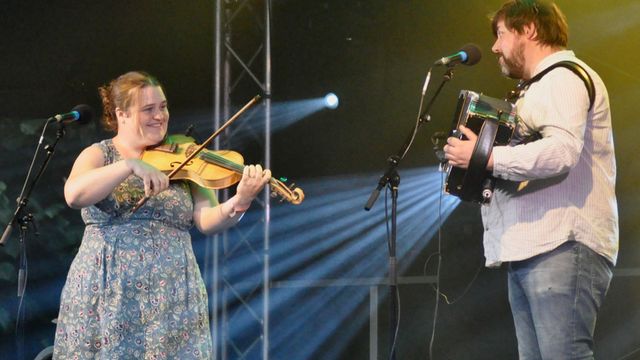 Multi award-winning contemporary folk duo Jackie Oates and John Spiers meld together their love of English traditional folk tunes and songs with their voices and acoustic instruments, resulting in a fresh sound that is uplifting, joyful and poignant.

Their album, ‘Needle Pin, Needle Pin’ is very much a homespun album, recorded as live during the first weeks of January 2020. Oates and Spiers first started playing together during spontaneous guest spots at Nettlebed Folk Club. They began playing extended sets and working on material from their native Oxfordshire, including the ‘Lace Tells’ that form Jackie’s radio ballad ‘The Lacemakers – the Lost Art Of Telling’. The album features tunes and songs from the Oxfordshire area, and comes as a limited edition, handstamped, hand made album.

“It’s a treat to listen to, with joyful pieces like Congleton Bear (telling an unusual story from the Cheshire town) and a brandy-based pair of slip jigs particularly full of sunshine. Oates and Spiers are a fine match, the tunes elegantly paced and played, while Oates remains one of our finest singers.” (Folk Witness)

Jackie Oates is a mainstay of English traditional music. Regarded as one of the country’s best loved folk performers, Jackie’s current focus is on collaborating with a diverse array of artists and commissions. Following the death of her much-loved dad five days after the birth of her first child, Jackie’s 2018 album The Joy Of Living reached beyond the past lives in folk song to the lived experience of all of us. The Guardian called it “utterly gorgeous… moving, depth-filled.” Since then, Jackie has released classic covers with Scritti Politti’s Rhodri Marsden, researched pagan Bath for the mavericks at Lush cosmetics, been Artist In Residence at the Twitter-famous Museum of English Rural Life, lent her voice and musicianship to CBeebies’ Nick Cope’s Popcast, and begun an ongoing mixed media work about the history of lace telling. Jackie Oates continues to bring elements of the English folk tradition to new people and places; in turn bringing a much needed calm and joy to those who hear it. Read more at www.jackieoates.co.uk.

John Spiers known better in folk circles as Squeezy, has made a name for himself as one of the leading squeezebox players of his generation. Well known for his long-standing duo partnership with Jon Boden in the formidable Spiers & Boden as well as his contribution to the massively popular Bellowhead, John has also played with Eliza Carthy’s Ratcatchers and a number of local folk-dance bands. Read more at www.johnspiers.co.uk.