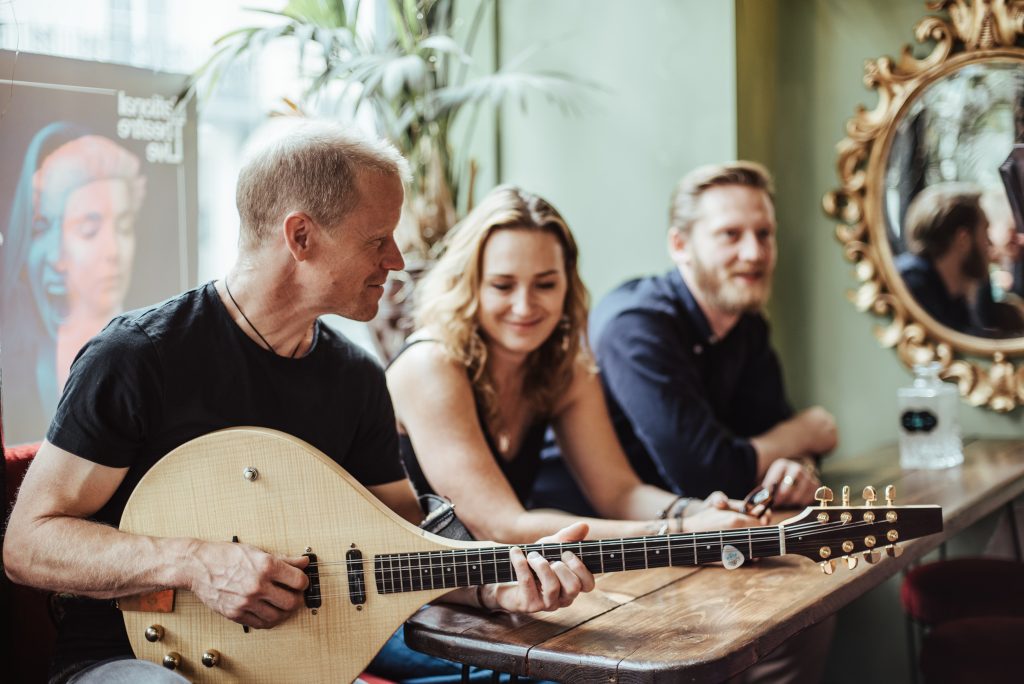 A veteran of the folk scene, Benji is well known as a rhythmic driver of such outfits as Bellowhead, Faustus and Seth Lakeman’s band. ‘Multi instrumental virtuoso’ (Tom Robinson, BBC Radio 6 Music), Benji is now bringing his own writings vibrantly to life in this a classic power trio.

With recent festival appearances at FolkEast, Beardy Folk and Shrewsbury Folk Festival plus a live session for Tom Robinson on Radio 6 Music, the band have been stirring up a storm. With Benji leading on bouzoukis and guitar, Joelle Barker on drums and Pete Thomas on bass, the band stoke up rhythm’s, riffs and uproarious, soaring melodies. At times stark and raw. At times sensitive. Always powerful.

The Excess are ‘Persuasive and impressive…The glorious sound they make together is something rather special.‘ Folk Radio UK go on to say, ‘The subject matter (mostly story songs with a social conscience) is firmly in the folk/singer songwriter tradition, but their approach is more indie pop/rock/new wave.’

Joelle Barker takes the drum seat, joining Benji and Pete Thomas, and bringing a new and exciting energy to the music. Benji formed The Excess in 2017, drafting in fellow Bellowhead member Pete Flood on drums and Pete Thomas on bass. This line-up toured in 2018 and 2019, when the band released their debut album Gold Has Worn Away on Westpark Music, to critical acclaim, ‘A dynamic and powerful roots rock album for our age‘, according to FATEA Records Magazine.

With this triumvirate in place and a stack of new material the band are ready to embark upon a new era of touring, festivals and recording.

Benji Kirkpatrick is a singer, songwriter and musician. He has been performing solo for nearly 25 years and is one third of acclaimed ‘bloke folk’ trio, Faustus and was a key member of folk big band and multiple BBC Radio 2 Folk Award winners Bellowhead.

Benji is a long-term collaborator with Seth Lakeman, featuring on Seth’s successful releases ‘Kitty Jay’ and ‘Freedom Fields’ and toured again with Seth in February 2020 with the project ‘A Pilgrim’s Tale’, and during 2021/2022. He was head hunted by folk rock pioneers, Steeleye Span, in 2017 (40 years after his Dad, John, was in the band) and featured on album ‘Estd. 1969’ to celebrate 50 years of the band. He has also released four solo albums, including ‘Hendrix Songs’, saw him strip back the songs of his hero and set them in a new, acoustic light. In 2017, Peter Bellamy’s impressive song cycle ‘The Transports’ was revived, starring Faustus, Nancy Kerr, The Young ‘Uns, Rachael McShane, Greg Russell and Matthew Crampton. The production completed two successful tours and recorded an album of the project. Benji has also worked with numerous other artists including Oysterband, John Jones, Maddy Prior, Thea Gilmore and Joan as Police Woman.

Joelle Barker and Pete Thomas both have diverse and impressive CV’s. Joelle’s work includes; freelance percussionist for the RSC, drummer and percussionist with The Edwin Starr Band, TG Collective, Del Camino. Joelle and Pete T played together in The Worry Dolls, and Pete has played with The Vanguards, Philip Murray Warson, The London Django Collective and more.

Gold Has Worn Away (2019)
Westpark Music

A rhythmic alt roots album, with beautiful emotional moments and a strong underlying power. The album title refers to the fading promises of Western capitalist society.

“A five star album as golden as the CD sleeve.” – Folking.com